The Unity of Opposites

“If a tree falls in a forest and no one is around to hear it, does it make a sound?”

Coincidentia oppositorum or the coincidence of opposites speaks of things that we perceive to be opposites but are actually non-dual, i.e. part of the same thing and form a unity. Their existence and identity depend on each other and pre-suppose each other to form an endless loop.

This philosophy is used to explore our human need to order and simplify the complexity of the world around us. The show aims to explore the narrowness of human perception versus reality using these non-dual opposites. Using portals, circular imagery and looping mediums, the artist hopes to conceptually and symbolically explore how perceived opposites are actually unified.

Exploring this oneness previously believed to be dual leads to a transcendence of our everyday and takes the mind down a path of questioning and realization. The artist hopes this leads to a better understanding of ourselves and the world. 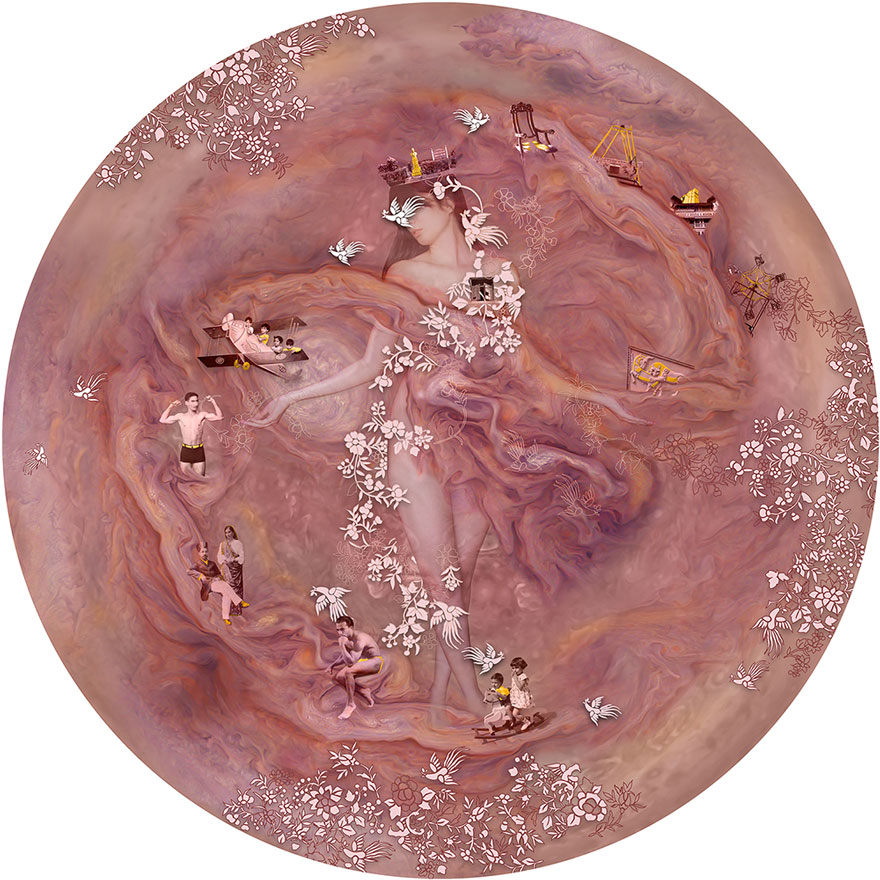 I am the Unity
‘I am the Unity’ explores the romanticism of childhood through an adult’s eyes. A self-portrait, the artist personalises this concept through old family photographs juxtaposed against images taken of the same places in 2018. The main motif that symbolises nostalgia and binds the artist to her world is the embroidery taken from her great grandmother’s sari. The piece is the tug of war between childish wonder and the tedium of reality while the mind tries to seek a yin-yang balance between both.

The Real and Imagined | Lenticular Print
This artwork is a manifestation of the artist’s everyday practice: a constant looping between the mind’s eye and the physical eye. Reality (the image with the birds) represents what we can see with the physical eye that is then pulled down into what is imagined through the minds’ eye. “I soar with the impossible, capturing and manipulating physical reality through imagination to finally manifest it back into the real world in the form of an image.” 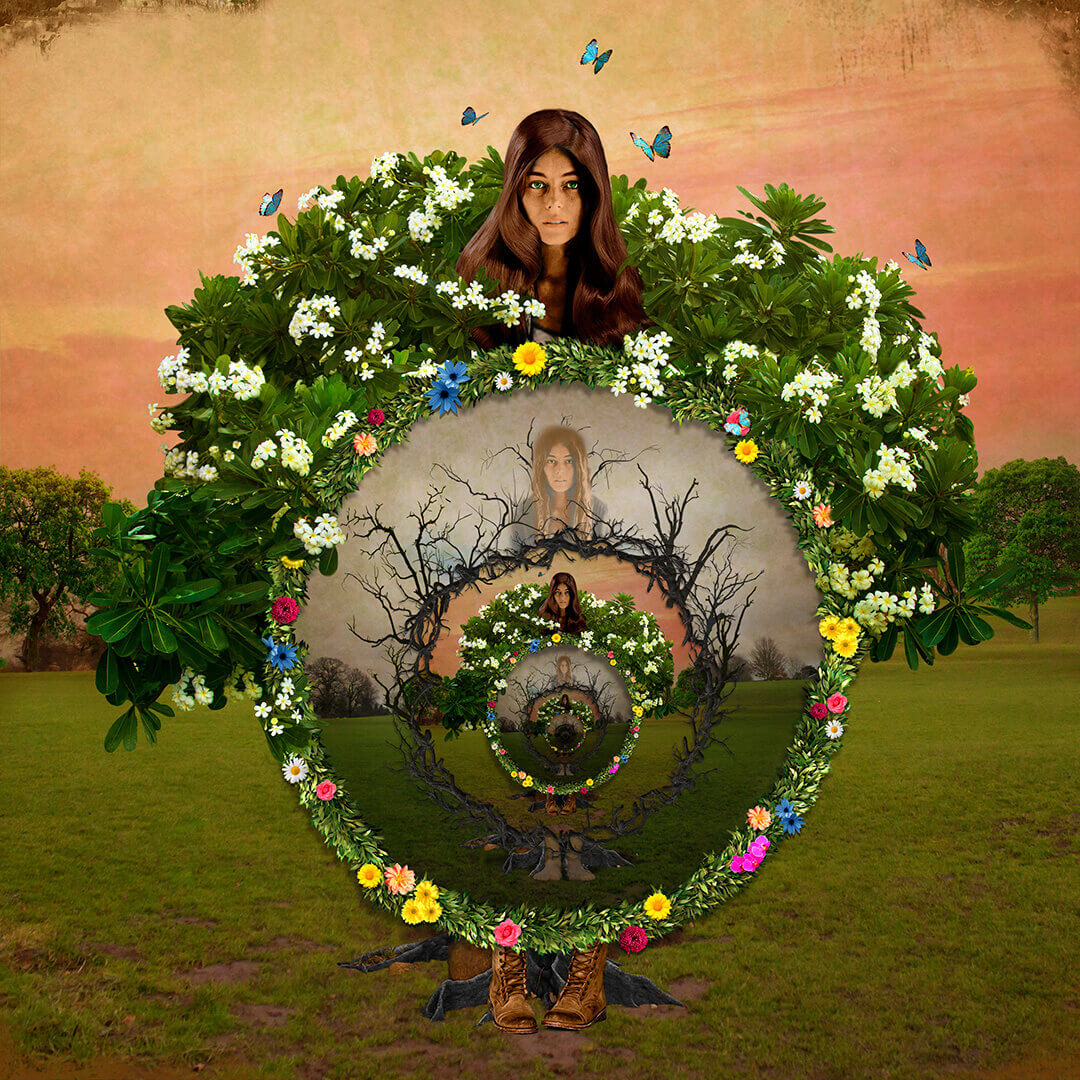 Life and death | Lenticular Print
Using the wreath and its dual symbolism – i.e. as a crowning glory or as something to lay down at a funeral – the work leads you through a segmented loop of life and death, depicting its forever elusive understanding and yet inevitable outcome.

Happiness and Sadness | Lenticular Print
The cloud at the top of the artwork was constructed using MRI scans of the brain when happy and sad. Each person trapped in their own personal boxes represents the different ways in which we deal with happiness or sadness – whether we block it out completely or embrace that the tumult emotion brings. 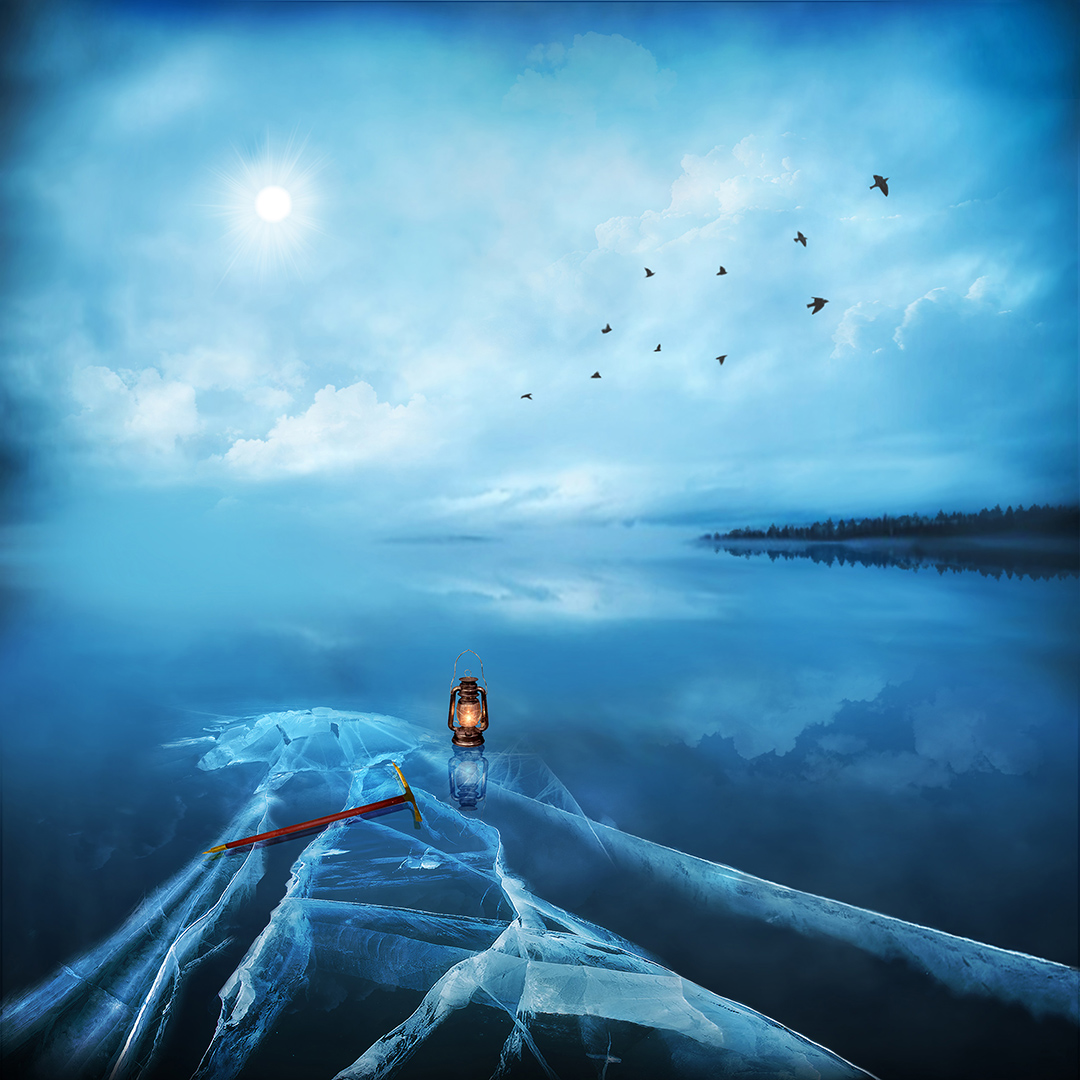 Creation and Destruction | Fine Art Print
The artwork explores a moment in man’s ever-determined conquest to order the world around him. Here, man has attempted to destroy nature to use her for his creation, but nature has reclaimed what will always be her right. For everything must be destroyed in order to create. They are entwined. 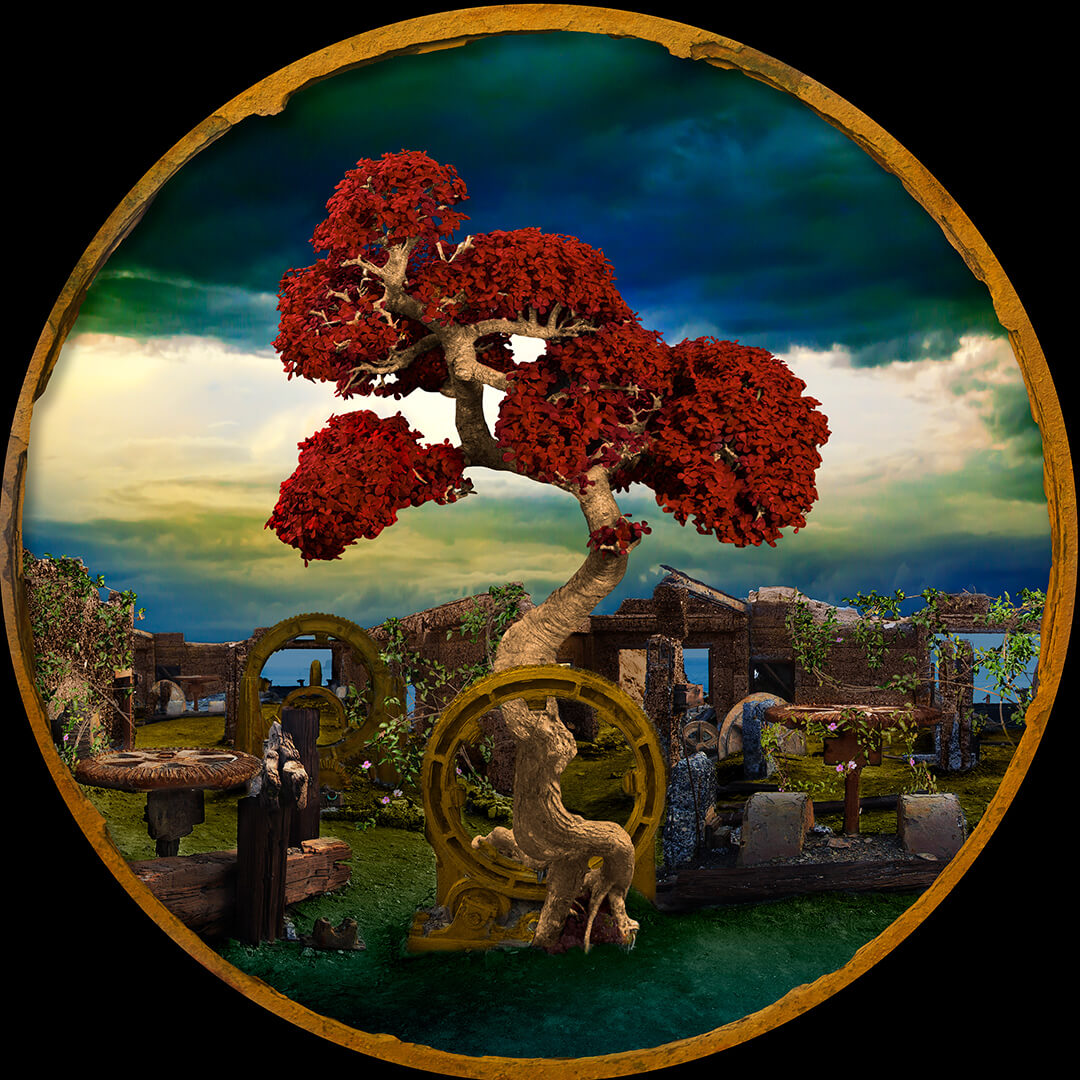 Creation and Destruction | Fine Art Print
It is in man’s nature to destroy and in nature’s tendency to build and balance. Nature cannot die; she can break in order to heal. But man can, and, in seeking balance, nature might kill. 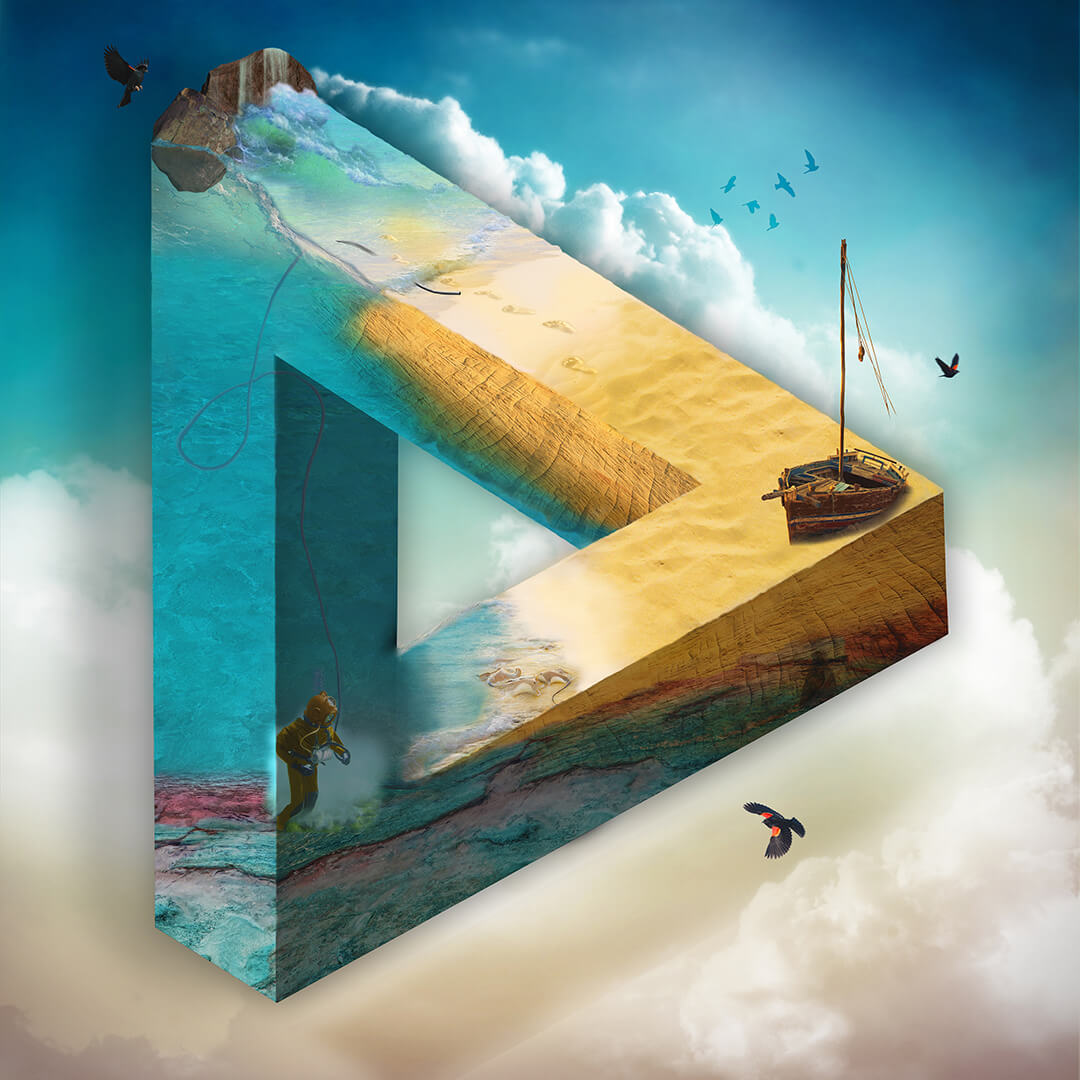 Order and Chaos | Fine Art Print
This artwork depicts the Penrose triangle, an object that cannot exist in our three-dimensional space. When looked at as a whole, the object is impossible, but if we consider each segment, it connects in some sort of order in our minds. The elements of the artwork also heighten this sense of order and chaos, as each aspect is not where they belong: a man in water, the fish on land and a beached ship each serving no traditional purpose. 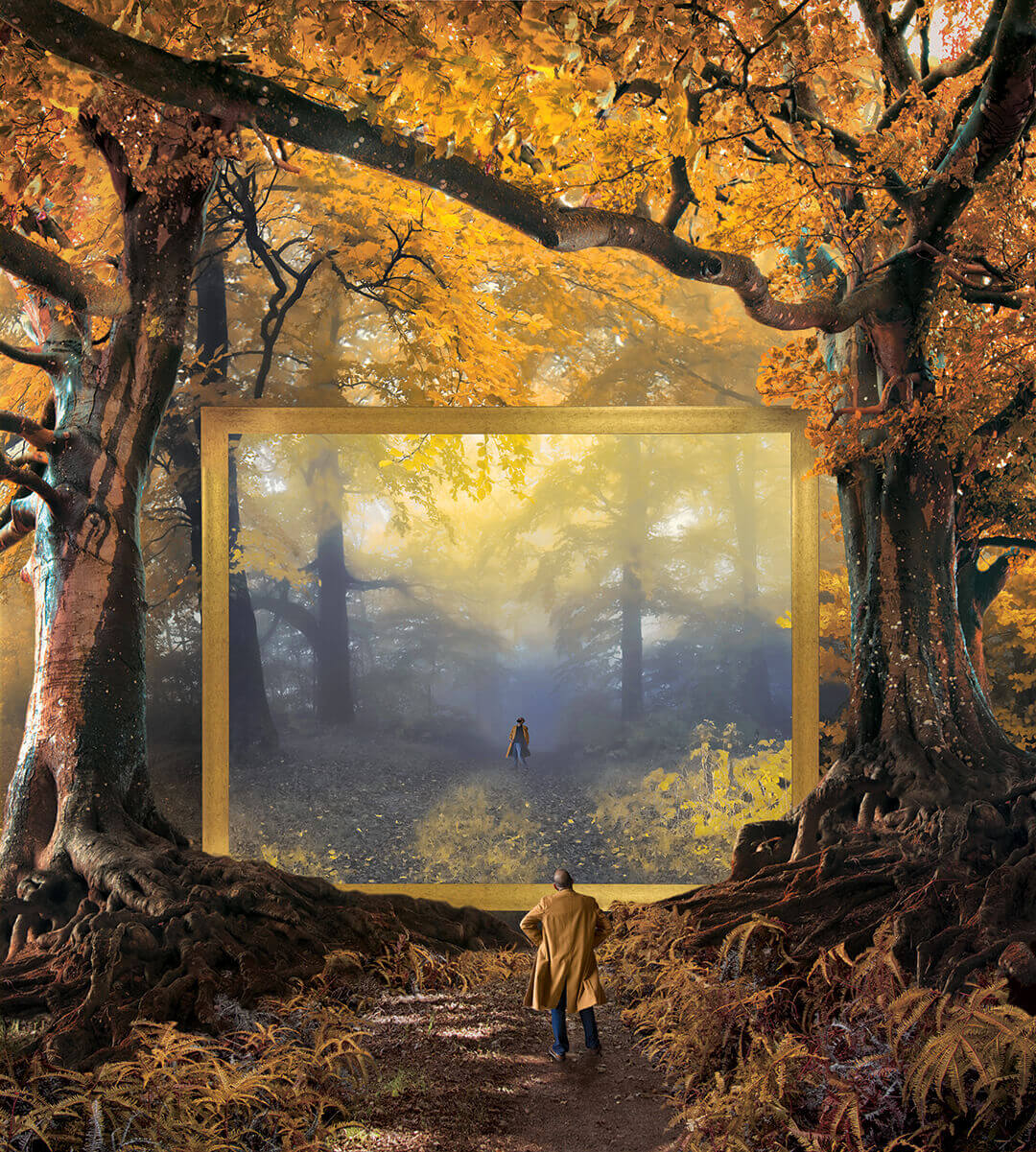 Order and Chaos | Fine Art Print
Inspired by Robert Frost’s ‘The Road Not Taken’, this artwork explores the reality of the human condition. The forest, too wild and unfathomable, will be ordered by each person individually to create a more manageable and yet flattened work. This is the refection we choose to study, instead of understanding the complexities around us. 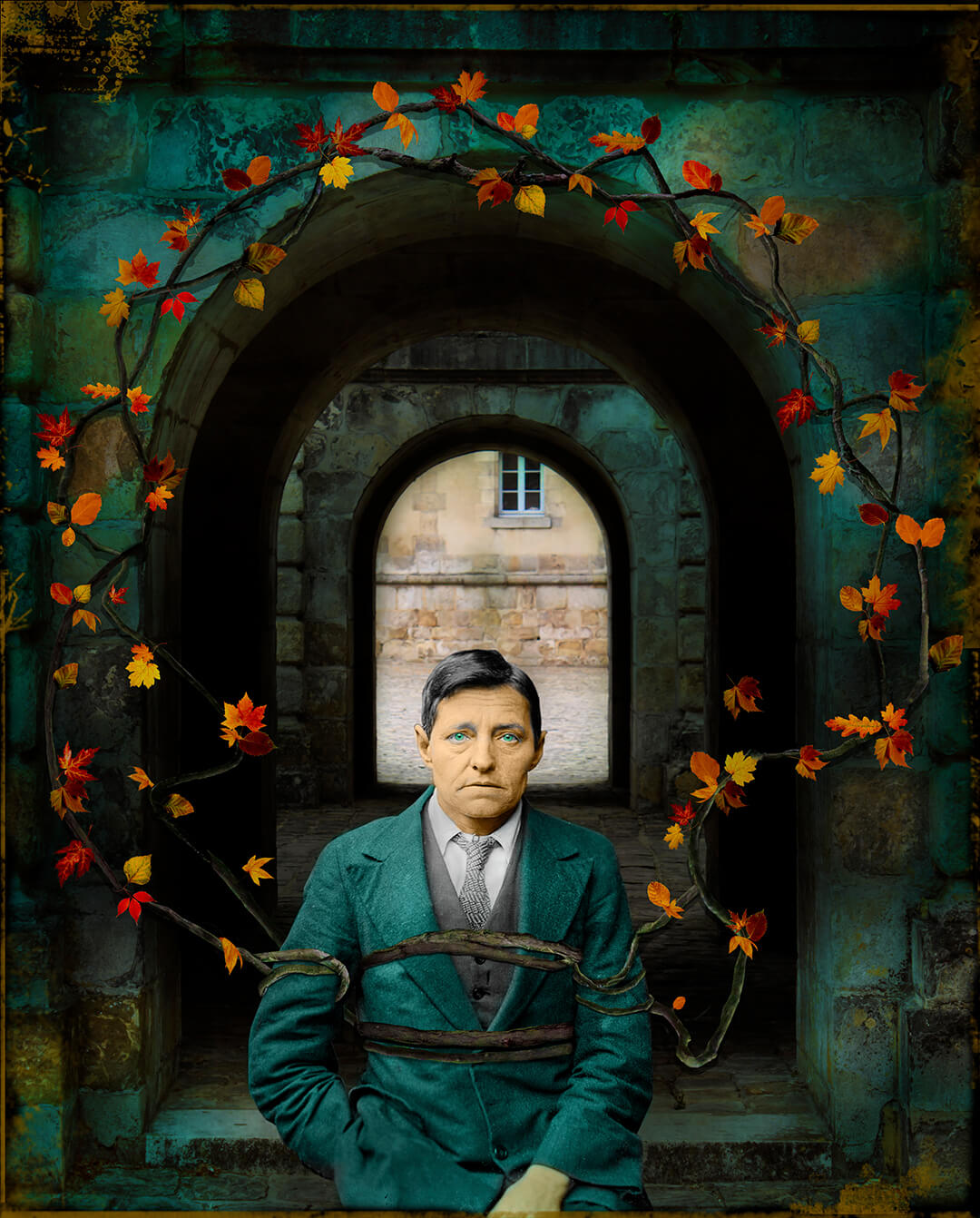 Melancholy | Fine Art Print
The artworks explore the role our inner self plays in how we perceive the world around us. When given the same circumstances, some of us can be bound by them while others can take what they are given and use it to their advantage. 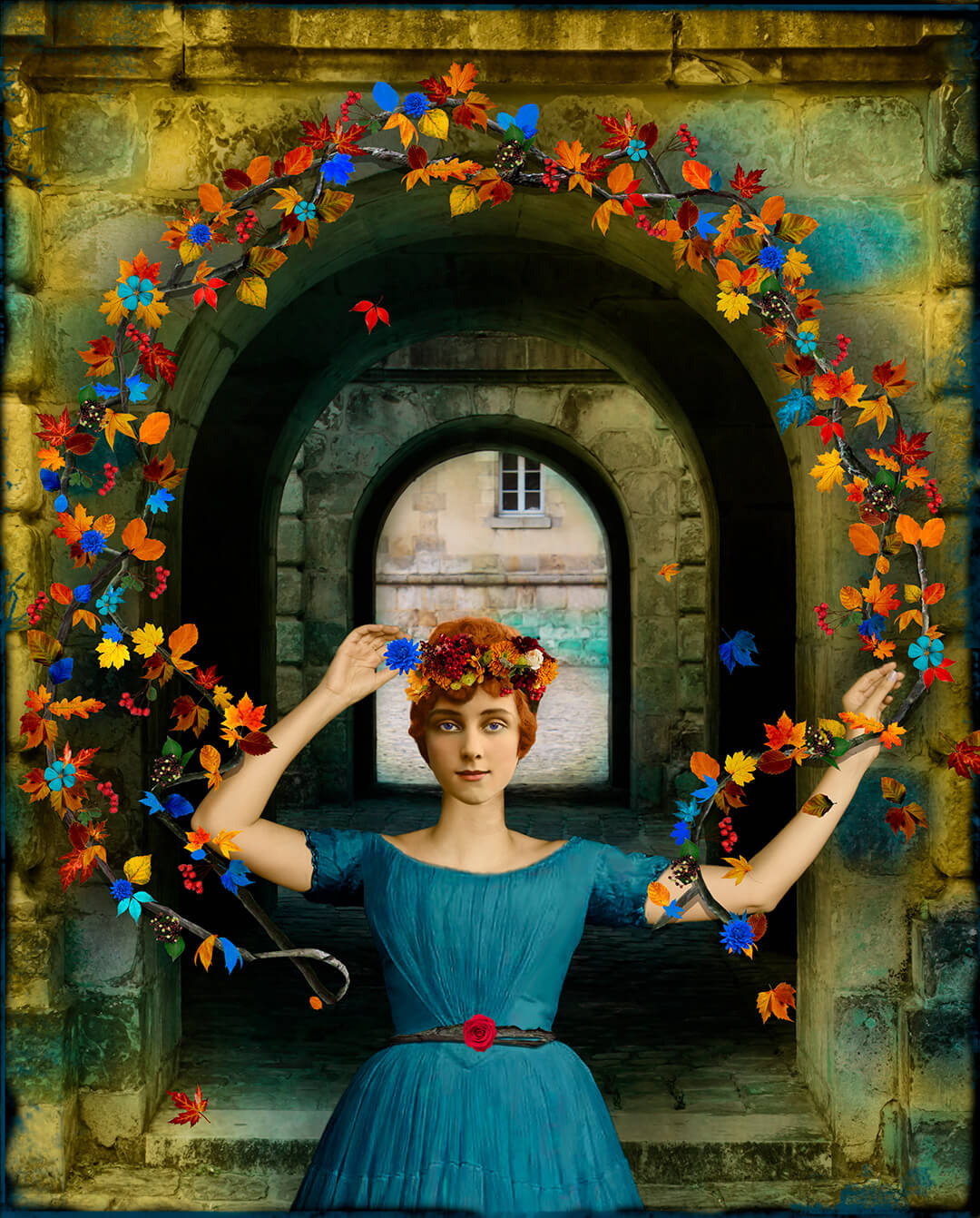 Contentment | FINE ART PRINT
The artworks explore the role our inner self plays in how we perceive the world around us. When given the same circumstances, some of us can be bound by them while others can take what they are given and use it to their advantage. 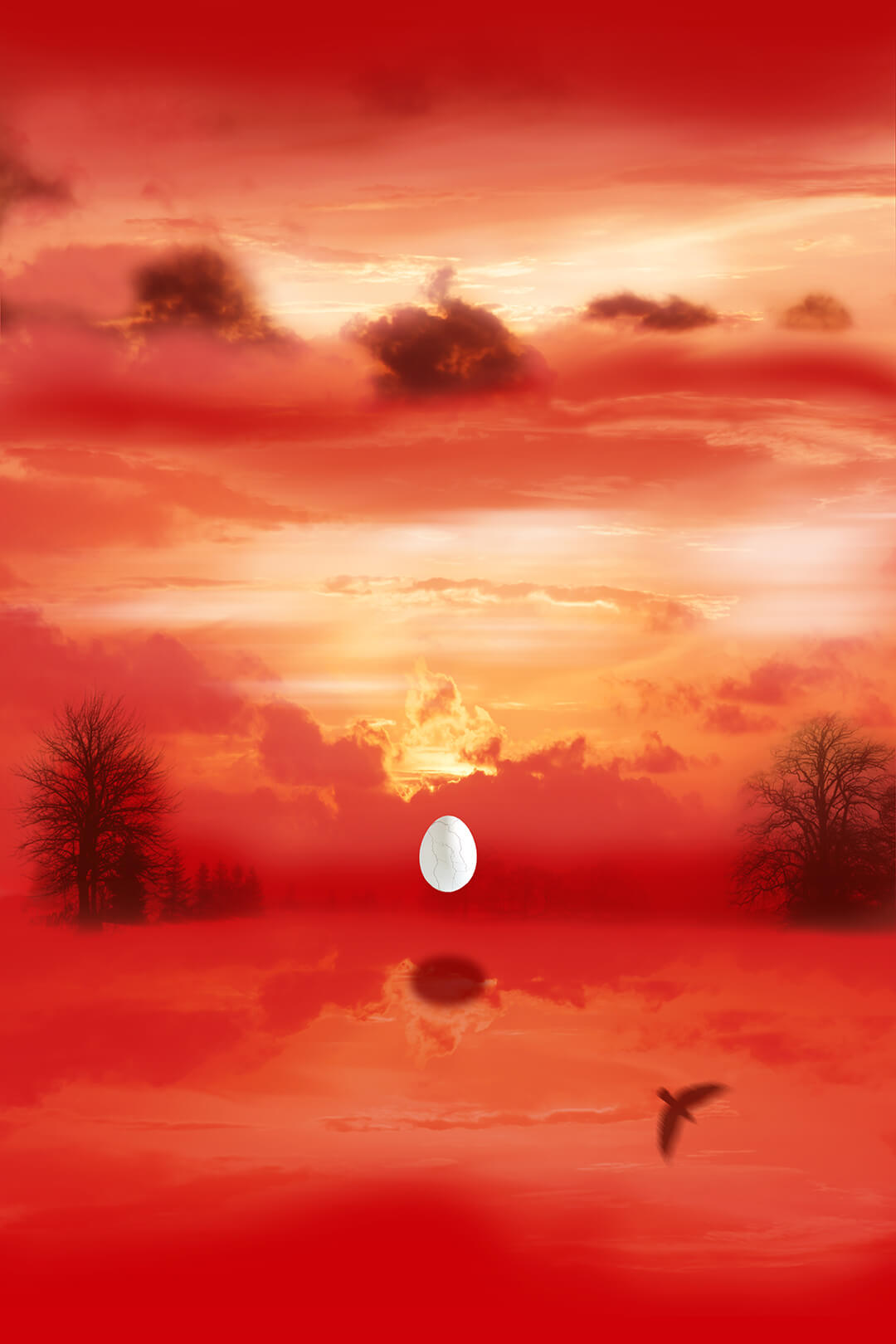 Existence and Non-existence | Fine Art Print
Inspired by the question ‘what came first: the chicken or the egg?’, this artwork explores seemingly contradictory states as they are held together in a single moment in time. Here, the sky is caught in both sunrise and sunset, while a suspended egg fissures, its contents hidden. Yet, somewhere out of the frame, a bird flies free, its shadow imprinting on the landscape. All moments of time become a singular moment so in this moment what exists? The chicken, the egg, both or neither? 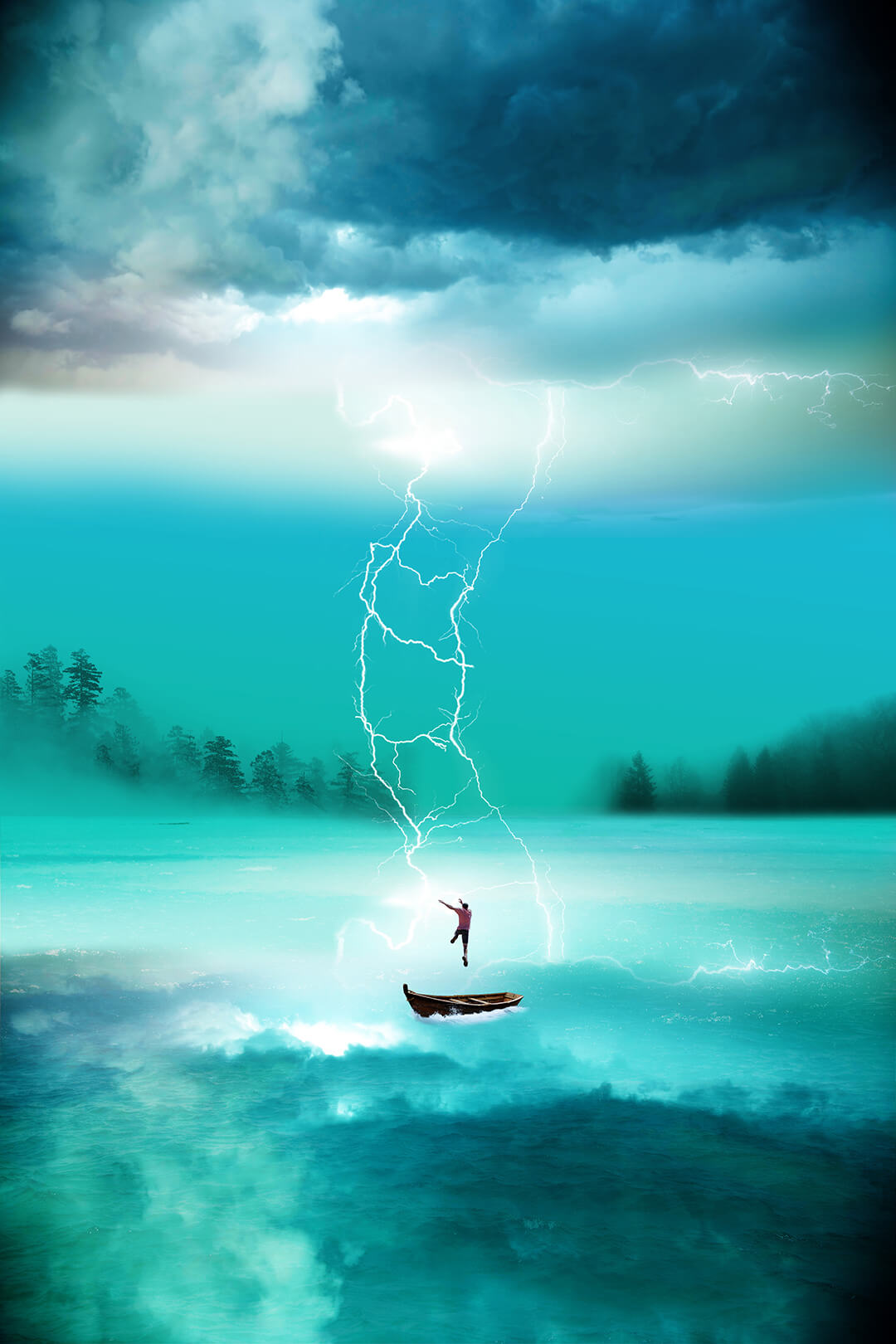 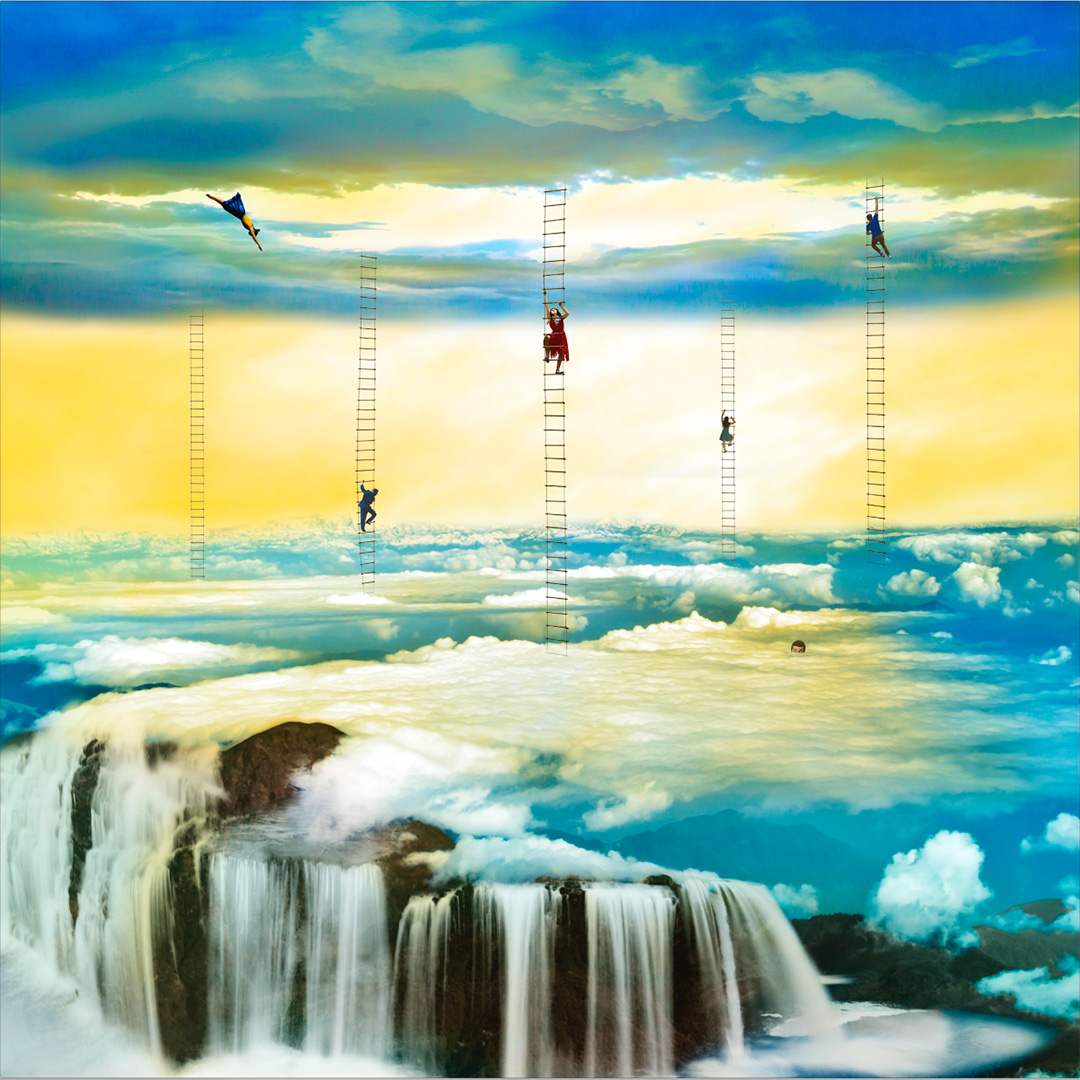 Heaven and Earth 2 | Fine Art Print
In an artwork where earth mirrors sky, a man seeks a dangerous foothold to touch the heavens. 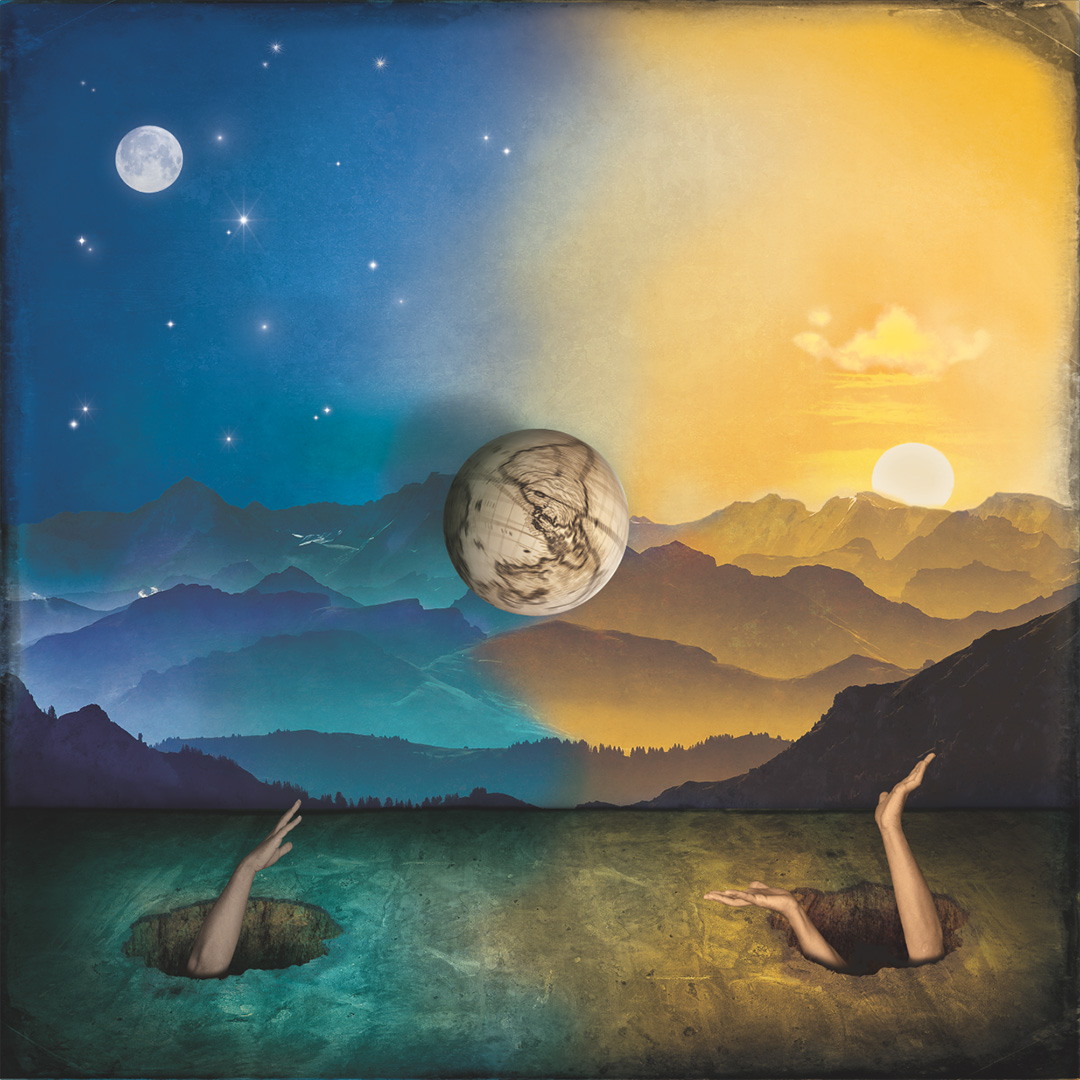 Day and Night | Fine Art Print
The night, once feared and insurmountable, has been understood, conquered and played with in our modern times. The opposites unify in light.

Join the Dots | Animated Lightbox
The sky was once a mysterious and intangible place filled with our gods. The only way to make sense of our position in the universe was to order and join the dots they formed to create the constellations – the stories of our selves. Each hot air balloon relates to a different century in our journey of understanding.

From the Pale Blue Dot | Animated Lightbox
Pale Blue Dot is a photograph of planet Earth taken on February 14, 1990, by the Voyager 1 space probe as part of a series of images taken of our Solar System. In the photograph, the Earth’s size is less than a pixel, appearing as a dot against the vastness of space. Inspired by this concept, the artwork deals with the juxtaposition between what is perceived, reality, and what is yet to be learned. Using parts of the Hubble telescopes image 'The Carina Nebula: Star Birth in the Extreme’ and the artist’s depiction of the universe, the artwork aims to explore the imagination and vastness of the universe through the scientific and real.

Dot to Dot | Animated Lightbox
Exploring the possibility of exploration, this artwork explores our human potential and how someday we might leave this planet we call home in search of another one. But it is important to remember our past on our journey into the future as new and old identities merge.