A Vision beyond the Cave

Taken from The Republic, by Plato, the Allegory of the Cave is a written dialogue between Socrates and Glaucon. It describes a gathering of people who have lived chained in a cave all of their lives. Their only experience of reality is watching shadows cast on a wall by the world passing behind them, and their naming of these shadows. For Socrates, the philosopher is a prisoner freed from the cave who comes to perceive the true form of reality, which lies outside the cave’s confines. Carrying the allegory further, he believes that all of humanity lives inside a cave and that every object and event we encounter is a ‘shadow’ of its ideal form. The few human beings who do manage to climb out of this cave to encounter the real world are met with scorn and ridicule when they try and explain this alternative vision to those still in the cave.

A Vision Beyond the Cave deals with our shrouded reality within the cave, and attempts to explore the life and possibilities beyond its restrictions. Each piece in the exhibition explores a possible other reality literally and through metaphor. In that sense, like Socrates, it discards the concept of ‘eu-a-mousi’ (which is to live ‘happily without the muses’ and to believe only what is tactile is real) and aims for a world open to our imagination. 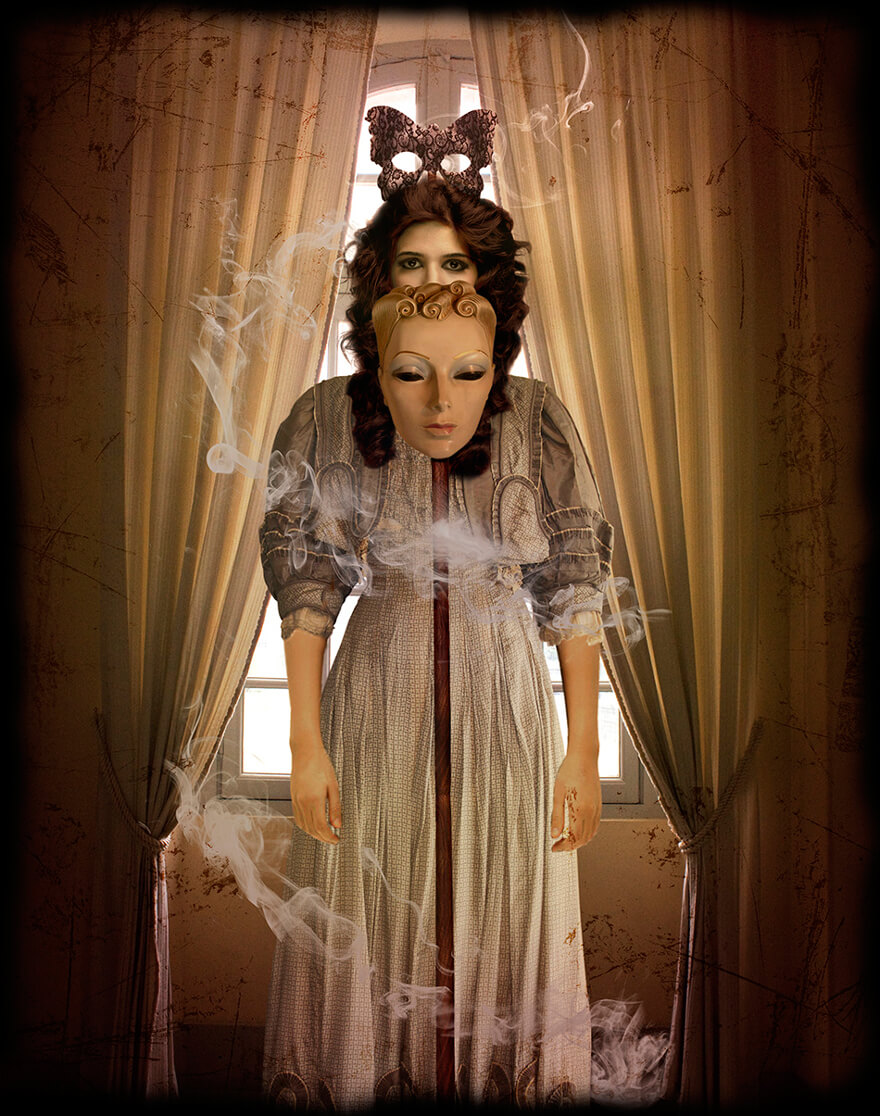 Masque-evade
This image, a self-portrait, is the tangible, visual representation of the mind that created it. The idea for it was inspired by a quote from Oscar Wilde: ‘Man is least himself when he talks in his own person. Give him a mask, and he will tell you the truth’. The mask both as a means to hide oneself and as a means to wear a new identity plays an important role here: the first mask covers, while the second shows how, in time, the mask can come to wear you, revealing only the parts it wants seen. The work thus implies the relationship between ourselves and the loss of self, as we try and evade our true nature in the masks we wear. 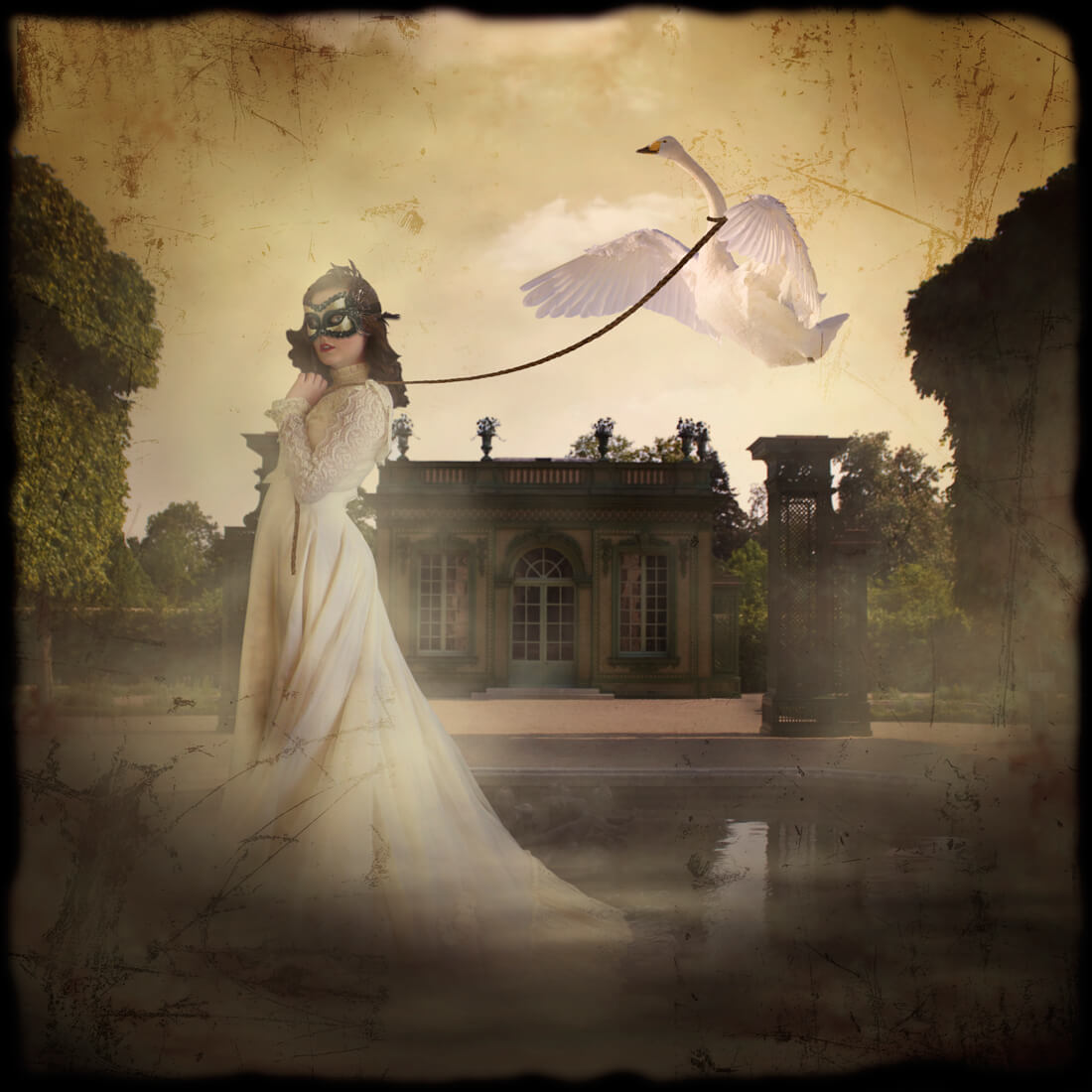 Leda’s Reprisal
This image is a reinterpretation of the Greek myth of Leda and Zeus. In the original, Zeus, the Greek God, appears to Leda in the form of a swan, where he overpowers and rapes her. Here, it is Leda who now has god-like powers, holding the once-magnificent God on a leash. A comment on women empowerment in today’s age, the ease with which she holds the leash and the tameness of the swan make you wonder whether the captivity is, in fact, forced or voluntary. 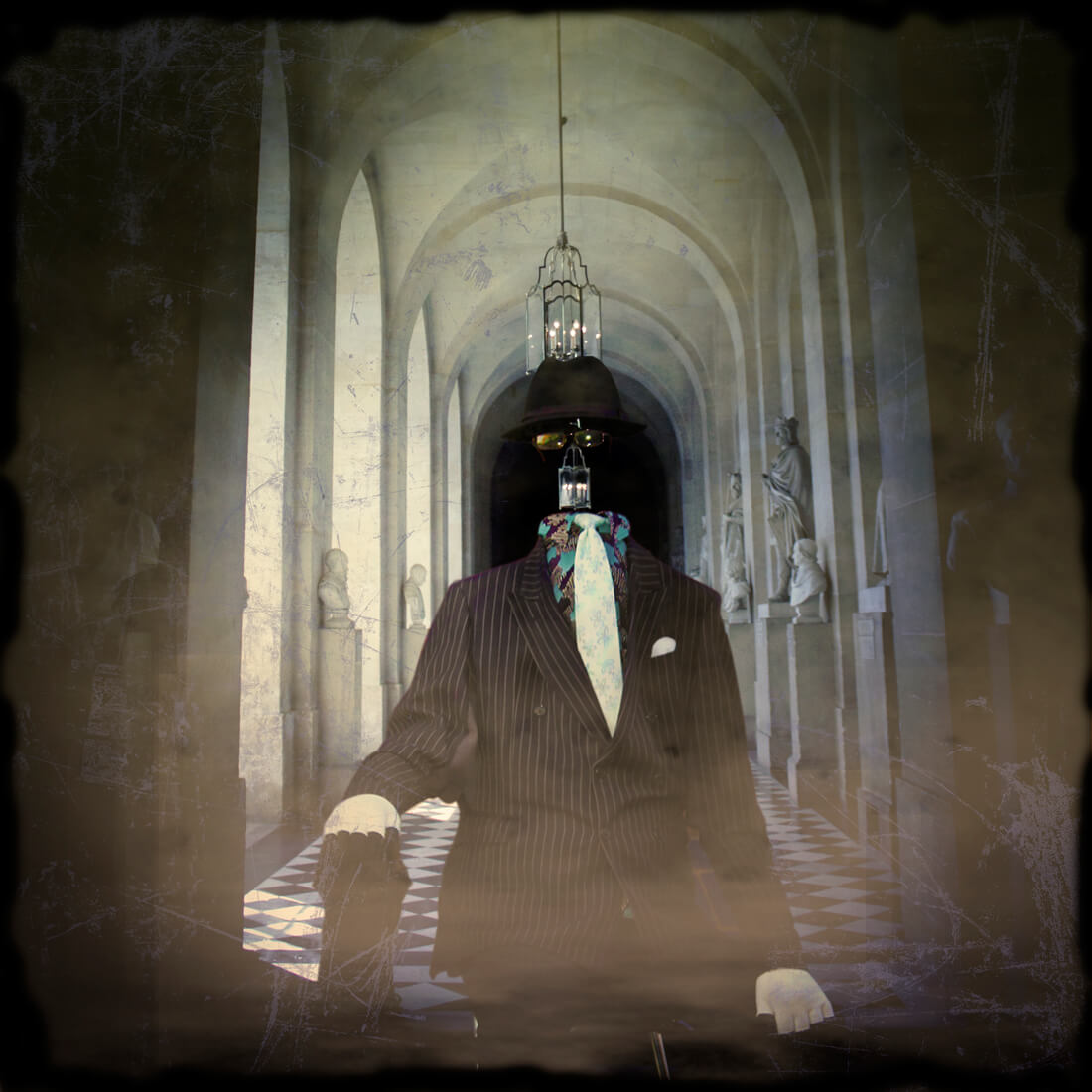 The Modern Man
The work symbolises a bleak vision of the modern man’s soul despite the richness of his material surroundings. 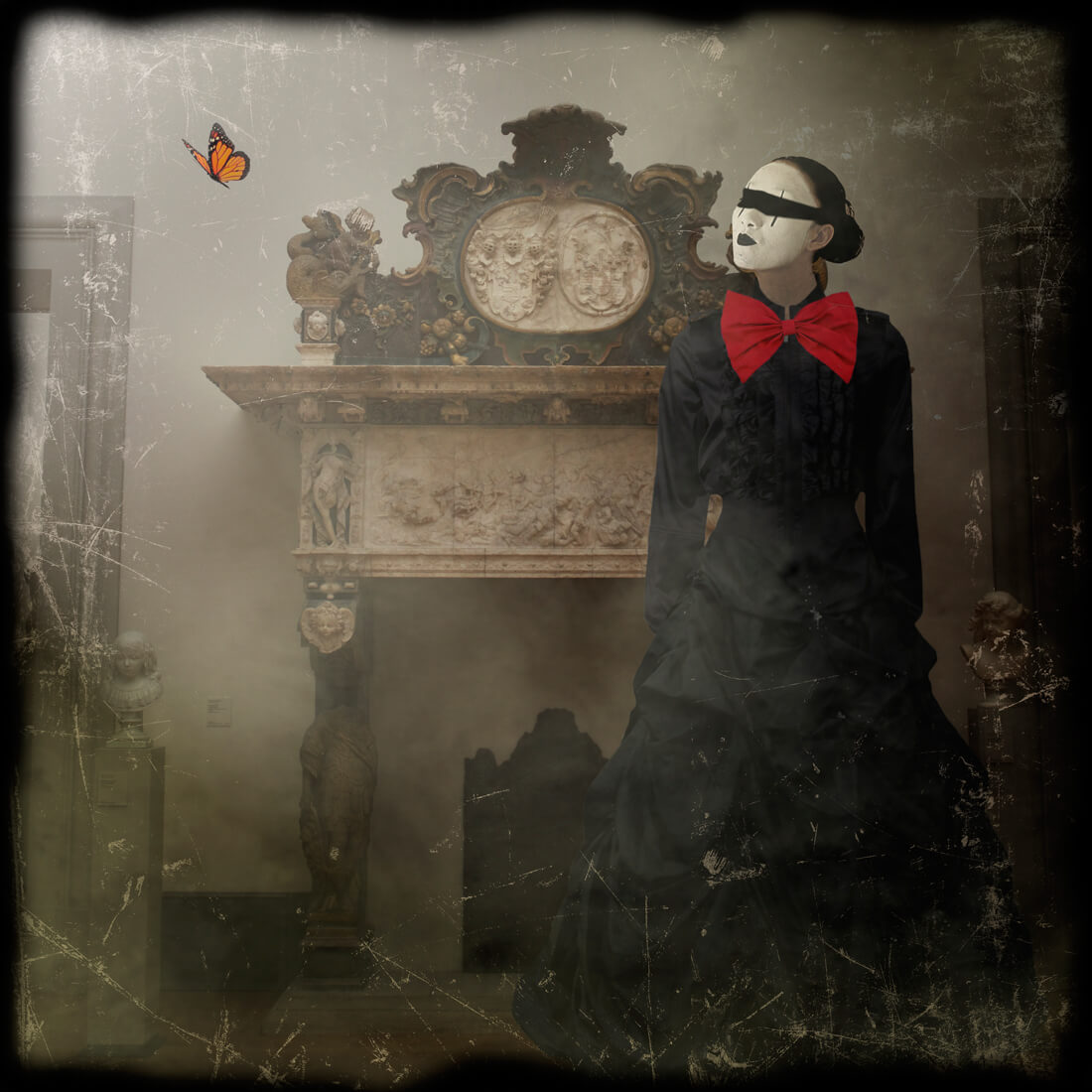 Listen
This work aims to represent sound as a visual by exploring the phenomenon of the heightening of one’s senses when other senses are deprived. The soft flap of a butterfly’s wings is enough to turn the stiffest head. 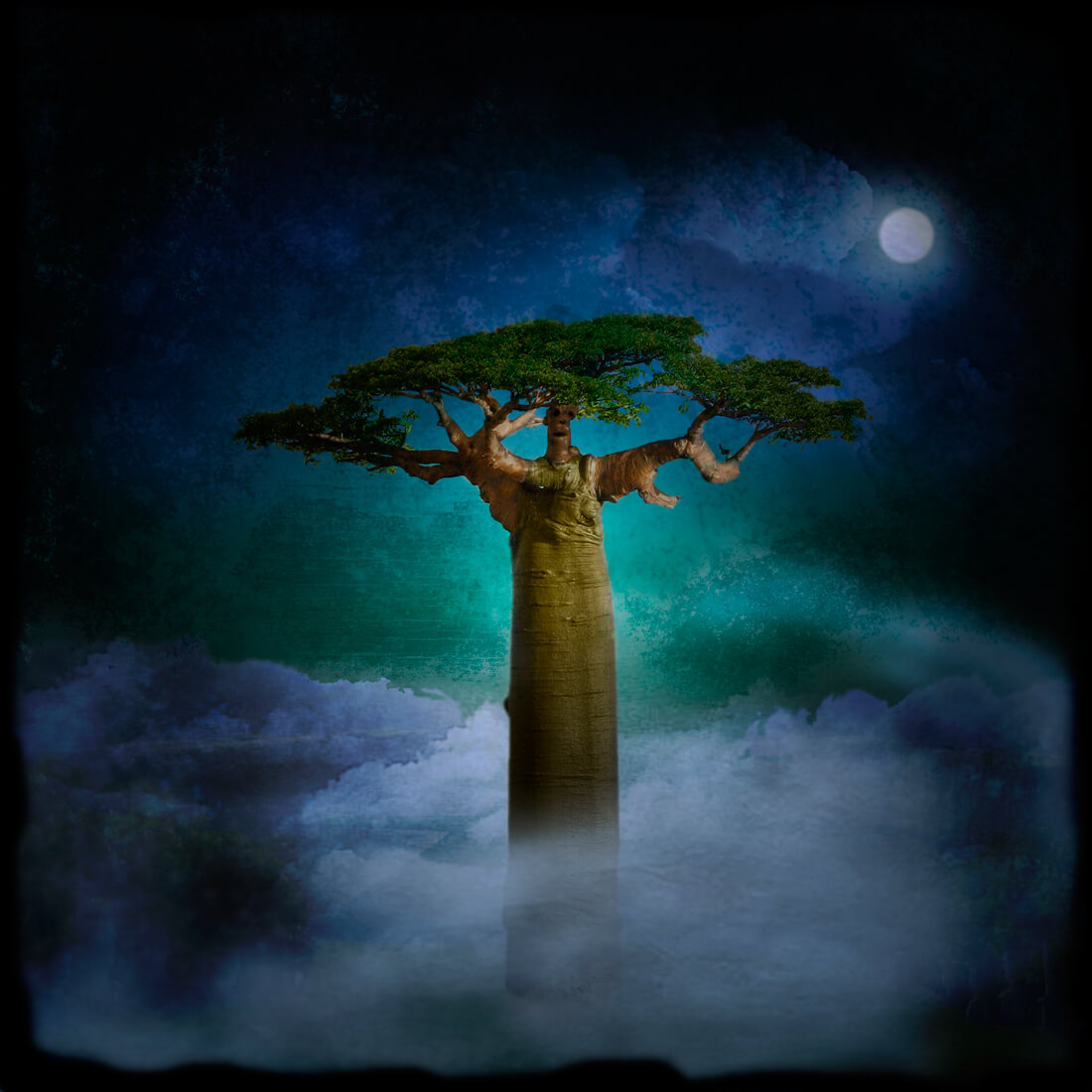 Dryad
The Dryad, a mythological tree nymph, is represented here in god-like proportions, the only being for miles around. Despite this grandeur, the nymph’s features hold sorrow—weltschmerz, a feeling experienced by someone who understands that physical reality can never satisfy the demands of the mind. The Dryad, then, stands on a threshold between two states, symbolising both the weariness of modern existence and the omnipotence of nature. 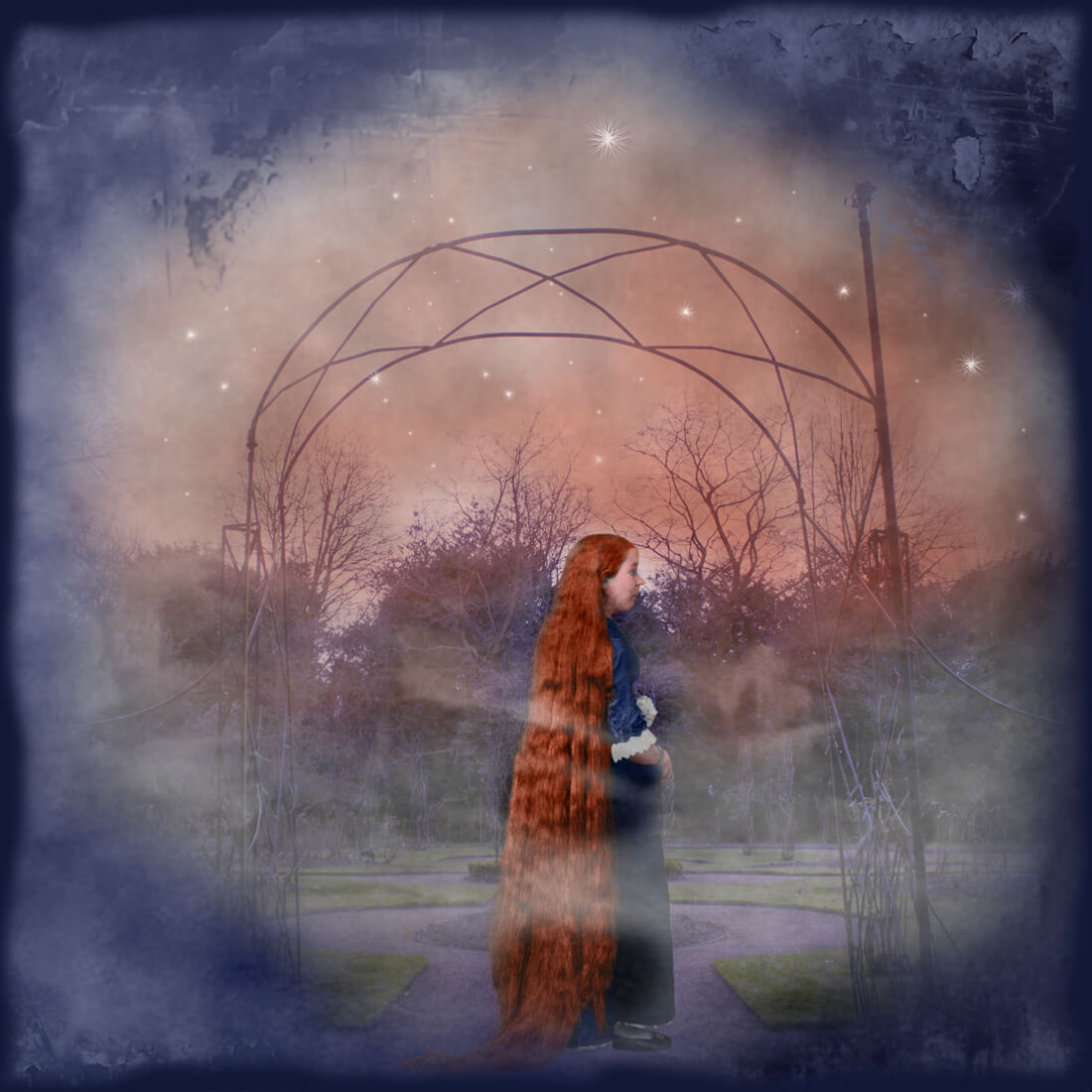 Waiting
Time ravages all forms: be it men, animal, or nature. The rose garden here has withered, along with the princess in it, but the stars above her move on a different time plane, and they shine with the promise of something better. 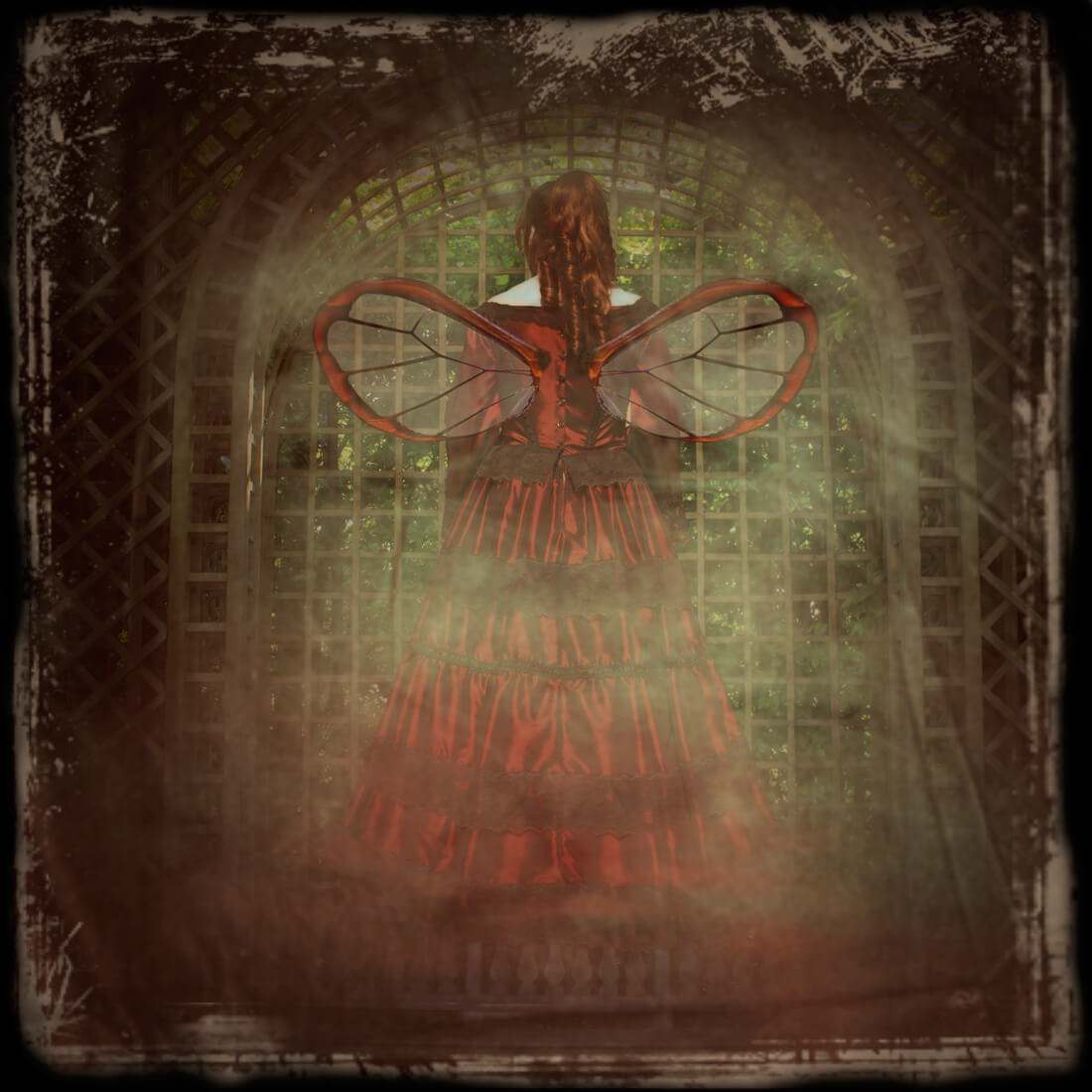 The Art of Bee-ing
This work communicates the ideal state of existence between human beings and nature: adaptive and in sync. 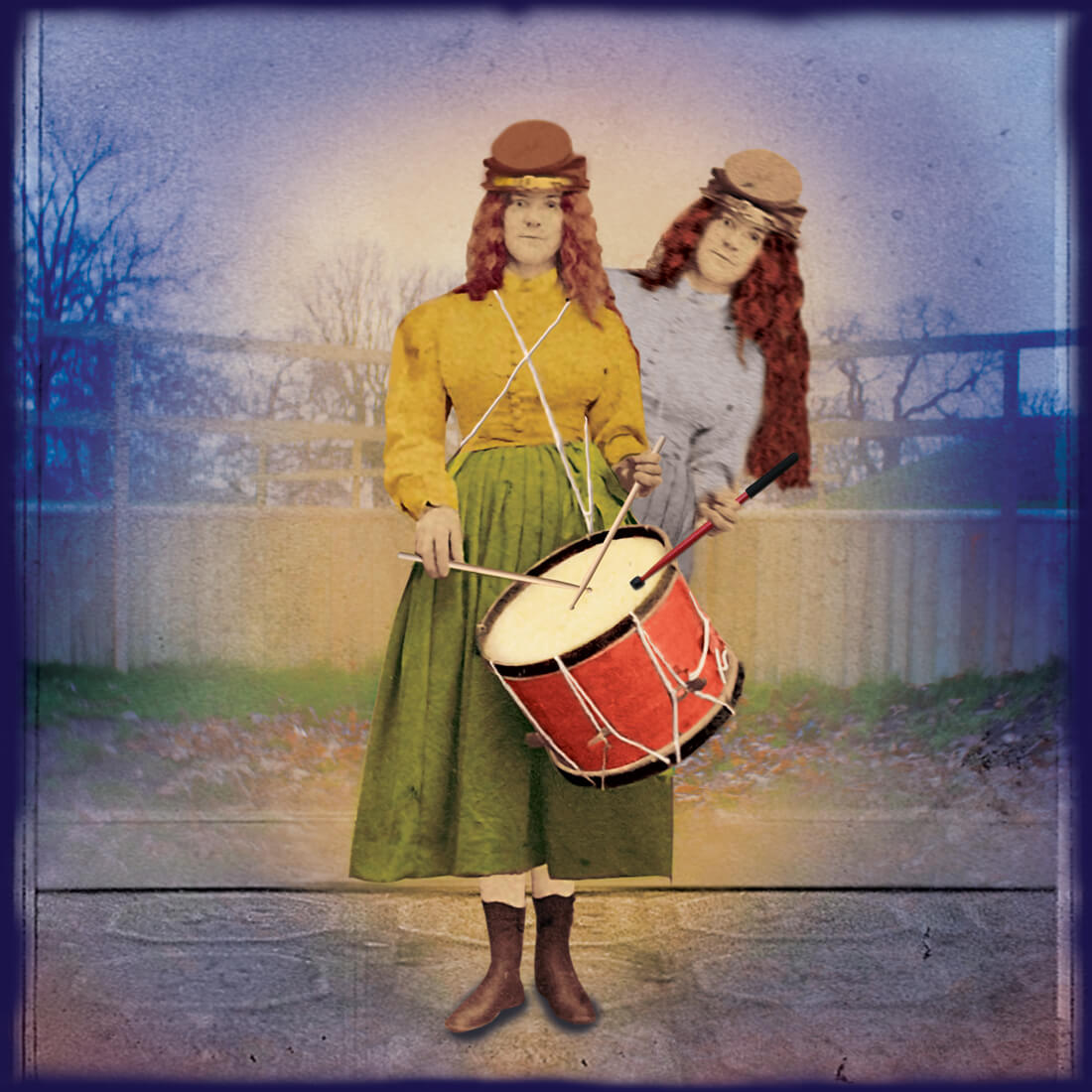 Glósóli
The Icelandic word for ‘glowing soul’, this work is based on a musical composition by Sigur Rós. The image depicts the idea of an inner self, the soul that makes a person complete. It explores the philosophy of that immaterial essence in all of us that is, in turn, the animating principle. 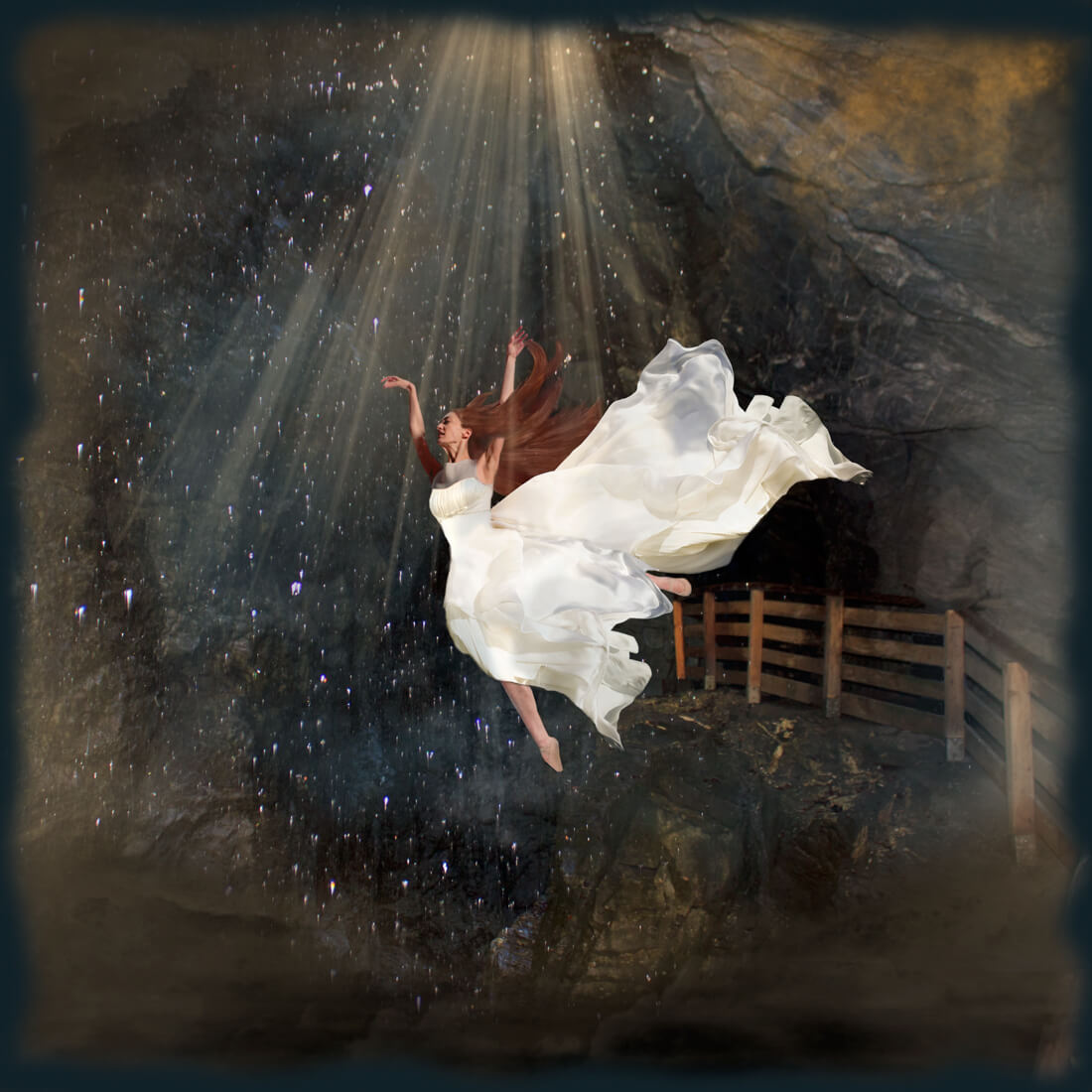 No, I Have No Regrets
Inspired by Edith Piaf’s classic, Non, je ne regrette rien, the image symbolises the weightlessness and erraticism brought about by the melody and lyrics. A hyperbole in depiction, it tells the story of a leap of faith, of risking it all in one graceful yet poignant move. 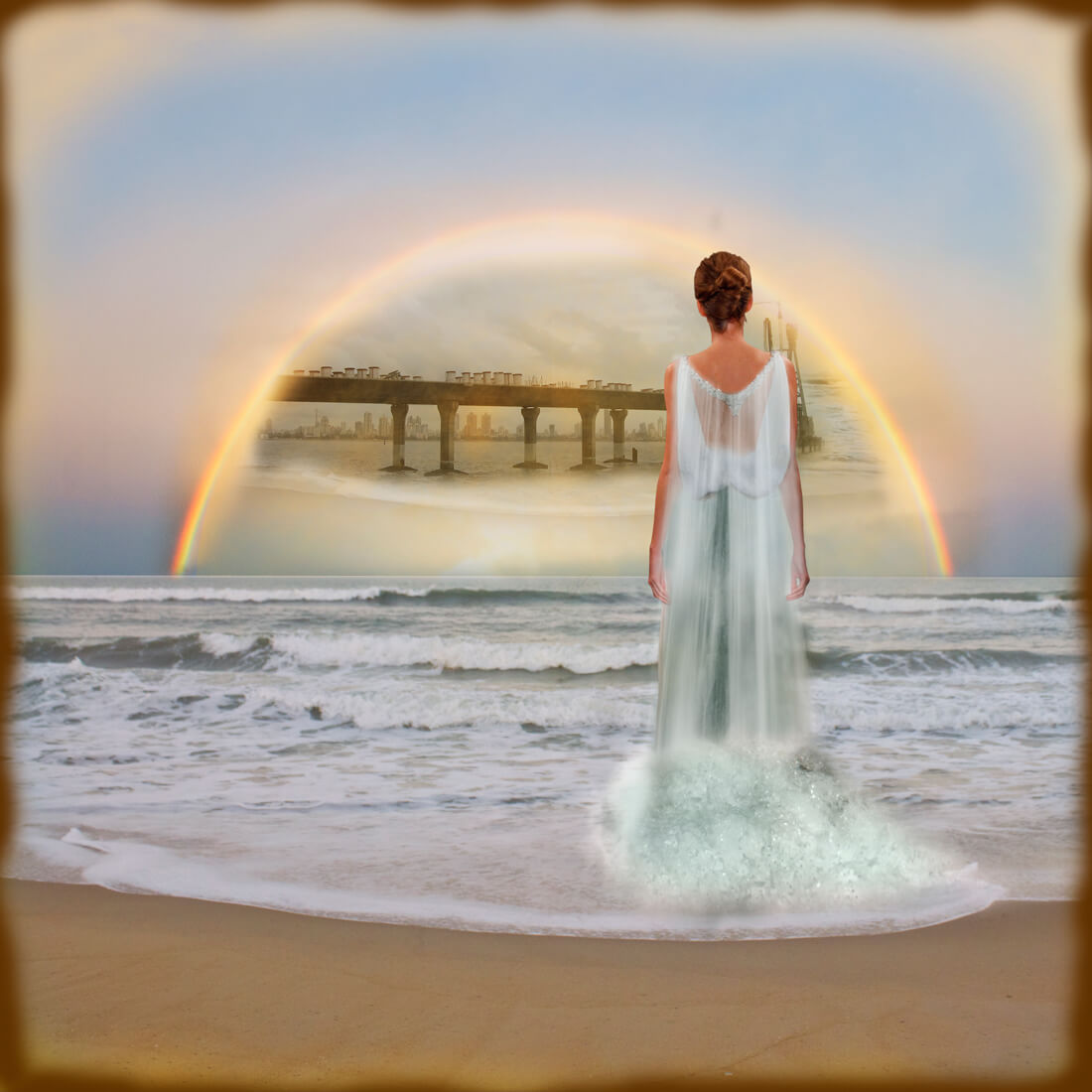 The Human Canvas
The narrative of this work describes the impact the human race has had on the serenity, beauty and vital richness that nature has to offer. It depicts a nature sprite looking in from beyond the cave to see what man’s limited vision has created and what it has destroyed.

The Darwinian Woman
Inspired by the real-life story of a woman who followed her husband to the Galapagos Islands for his work, this work shows her creating her own brave new world by adapting to the harsh, untouched environment around her. 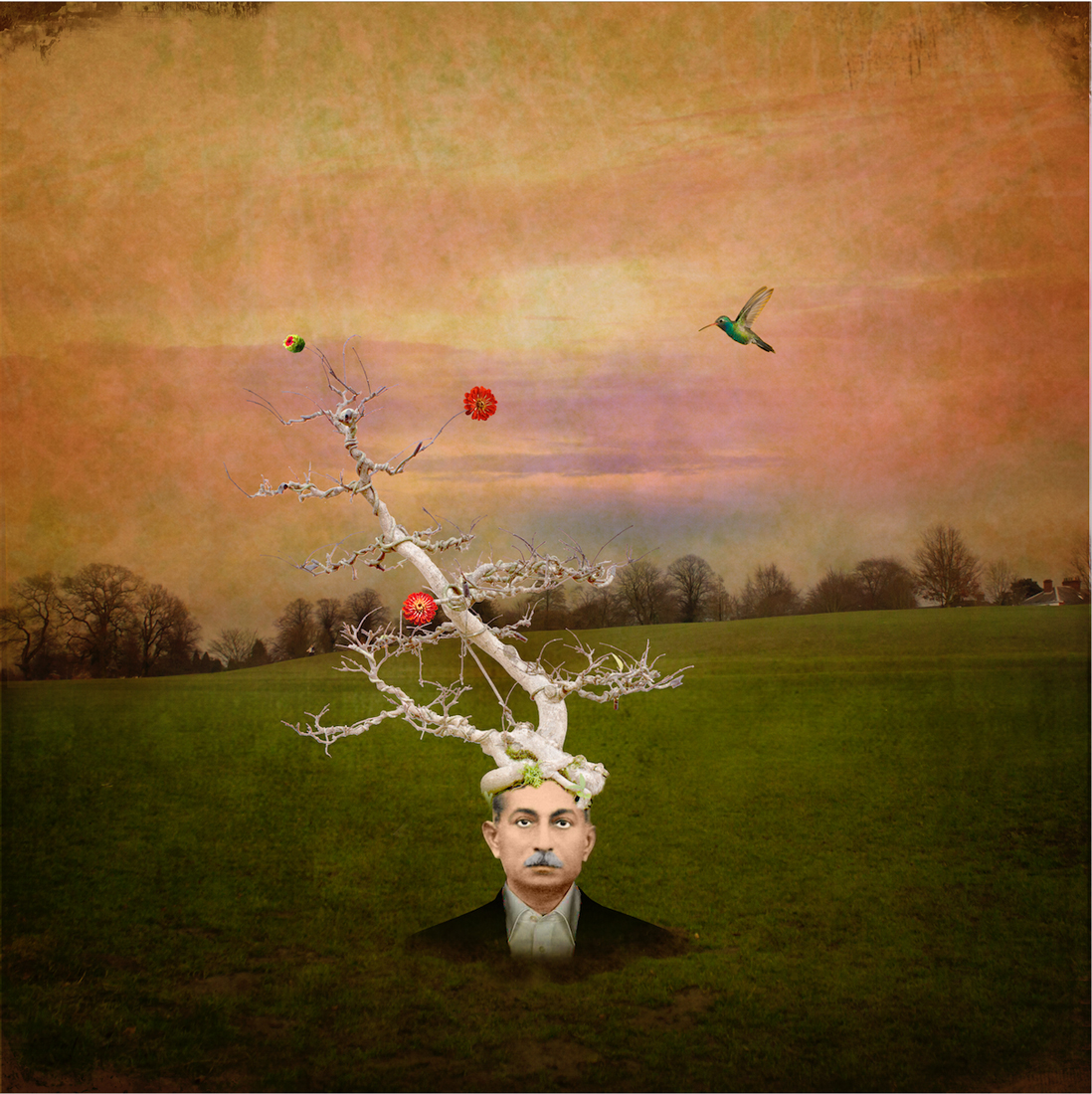 The Blossoming
The artwork depicts the flowering of the mind into something more beautiful and fruitful, and the inherent hope in such a burgeoning: that this thought will germinate and pass on. The work forms a visual metaphor of leaving the cave to find something more substantial. 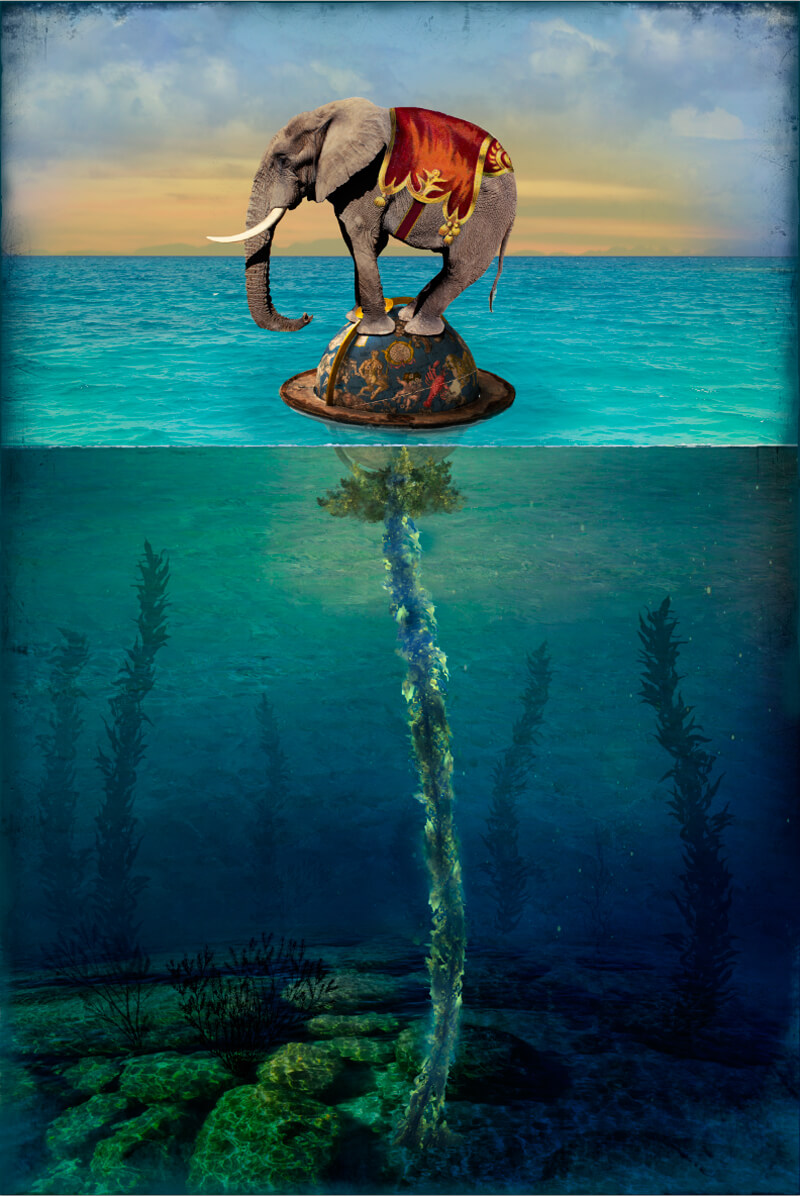 Roots in Desolate Places
Presented in positive colours and with an almost comical visual, this work seeks to evoke a feeling of lightheartedness associated with classic circus images. The tone belies the predicament of its central character: a lone elephant, tethered to the bottom of the sea, doomed to live the rest of his life in isolation. The piece forces the viewer to look beyond veil of happiness behind which loneliness and sadness so often hide. 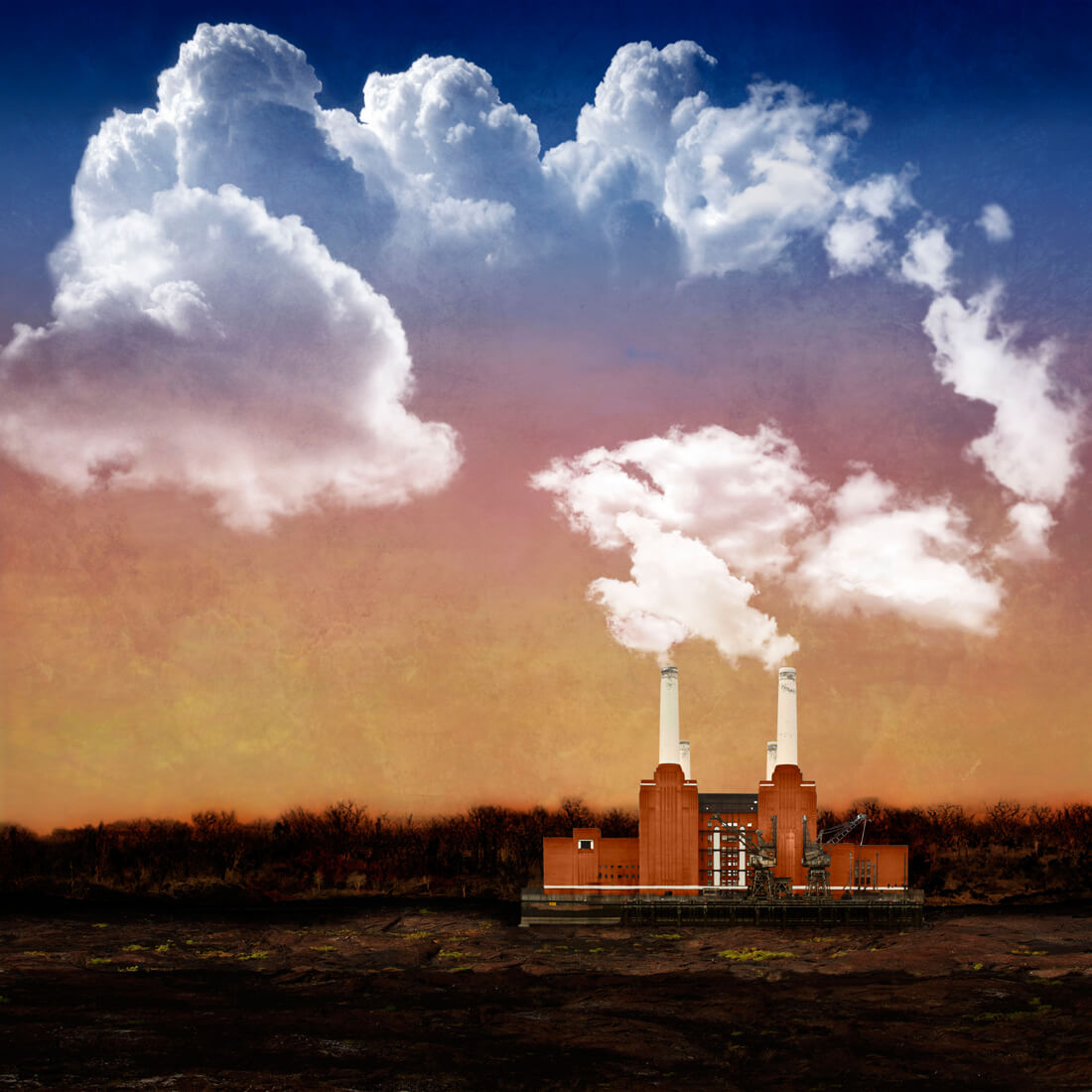 Is That Where They Make Clouds?
The work is a product of a childish hope that one day, human production can be responsible for serving our planet instead of destroying it. 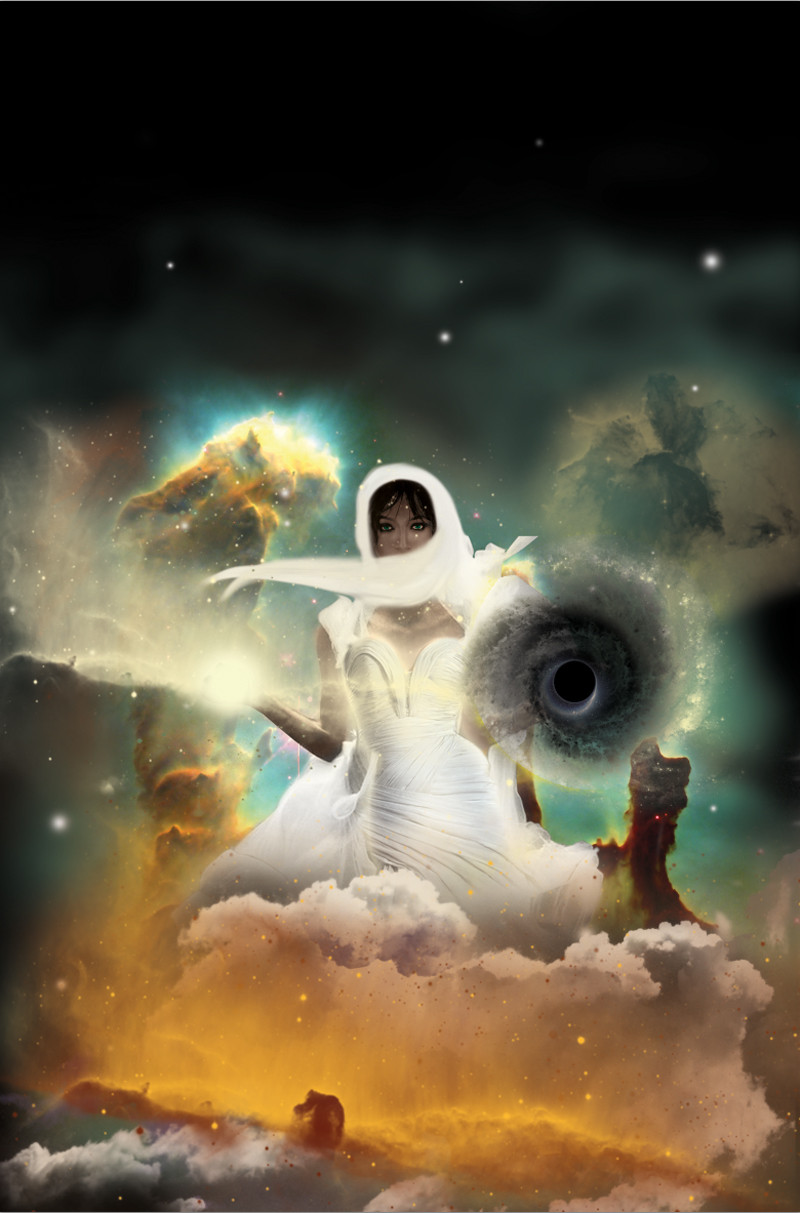 The Pillars of Creation and Destruction
A part of the artwork is formed by NASA’s famous image of the pillars of creation. It is named so because the gas and dust are in the process of creating new stars while also being eroded by the light from nearby stars that have recently formed. Taking forward the image as metaphor we see a female deity, one akin to Shiva, a creator and destroyer, shooting the energy of creation from one hand while the black hole in her other turns everything around it into nothingness. 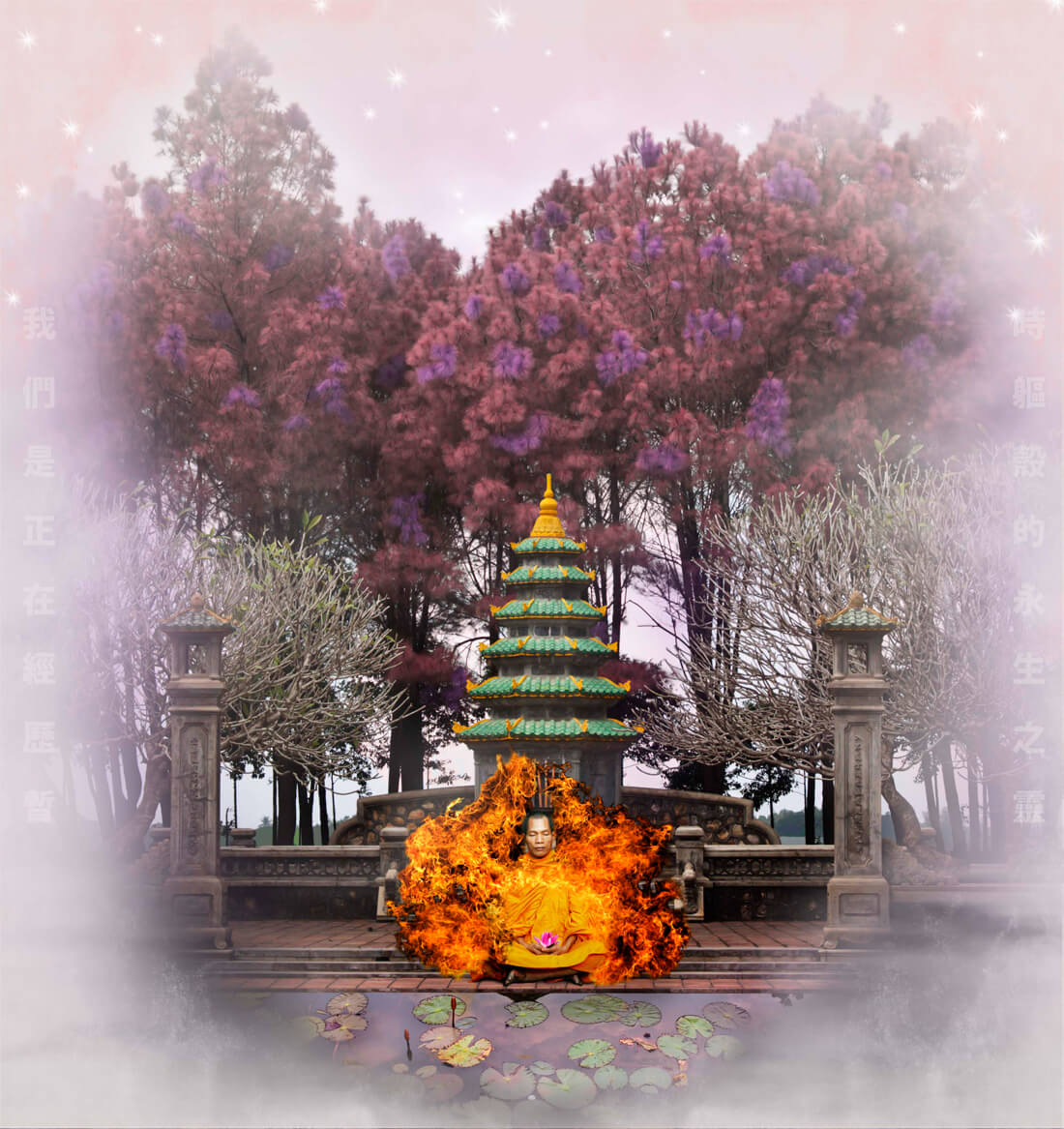 The Lighter Soul
The work is centred on the Vietnamese shrine dedicated to Thich Quang Duc, the monk who famously immolated himself. (Buddhists believe that self-immolation can bring about nirvana and therefore immortality.) Based on the Lotus Sutra, the open lotus in the monk’s hand symbolises the attainment of nirvana; all other lotuses remain closed. The text on the side reads: “We are eternal beings experiencing temporary bodies.”

The Virtue of Solitude